So I celebrated my birthday recently and the only thing I wanted most was a short little getaway to rest and recharge. It’s been a pretty good start to the year but so busy that I’m not really sure how we managed to make it into March already. I mean. It’s March. Has anyone else cottoned on that we’re almost a quarter ways through the year already?! Where does the time go?

I was fortunate to have some friends willing to join in the trip as well, most of whom were also feeling the weariness that comes with the busy schedules of a new year and enthusiastic for a small reprieve from work, even if only for a weekend! And it really was meant to be a short trip, but somehow we managed to cram in quite a lot – good fun, good food, good company – and I felt so great when I got home, I felt like I’d been away for much longer than just a weekend! Indeed, to share it all, I’m going to have to spread it over a few posts, so I hope you’ll bear with me! Come, join me on my little sojourn and I hope it maybe inspires you to go on one too 🙂

So… it was settled that a birthday getaway was on the cards, and after a brief (and almost impossible) search, I booked a beach house in Mollymook, a town on NSW’s south coast. Located roughly three hours drive from Sydney, Mollymook is very well known for its beaches and surf, but perhaps better known amongst foodies and tourists alike for being the home to Rick Stein’s only restaurant in Australia, Rick Stein at Bannisters, in the luxe Bannisters Hotels. So tres chic no? Not that that’s the only foodie reason to head down south by any means. The south coast and southern highland region is full of amazing chefs, whether hatted or hatted-trained, and also loads of “non-cheffy” delicious, unassuming gems too — all making use of the great produce and seafood the coast has to offer.

Mollymook township itself is not that big, and our AirBnB was actually closer to Ulladulla, the larger town in the area. The Man and I headed down early Friday afternoon, making a lazy way down through Sydney traffic and were the first to arrive at the house and settle in. It was nice to have the place to ourselves for a few hours. The house was big, spacious and modern — tricky to find in our pricepoint for such a big group. Plus I’d left it relatively last minute to book so I was super happy when this place appeared after I accidentally cleared all my filters! Seems that air-conditioning isn’t as big a thing along the coast, being generally cooler, but after a long run of Sydney heatwaves, I was pretty focused on this point as a requirement. On this particular weekend the heatwave (thankfully) finally broke its long streak in Sydney… and turned into major hailstorms that we somehow also missed while on on the coast (kismet)! At any rate, the house was very comfy, well-stocked with basic pantry supplies and most of the mod-cons we could want. Just goes to show that you shouldn’t narrow your search too much when searching on AirBnB – you don’t know what you’d be missing! (Shoutout to our host Denise! AirBnB listing link at end of post.) 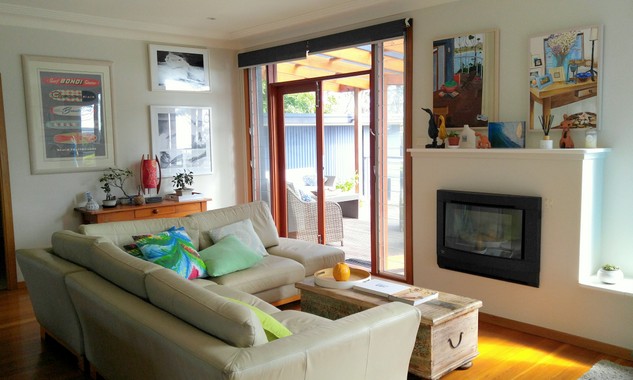 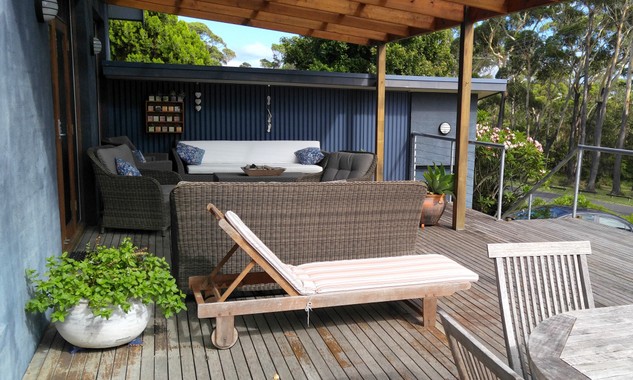 Knowing that most of our group would arrive later in the evening (or the next day for those who couldn’t quite get away from work), the Man and I went off in search for dinner. I committed to keeping things as simple as possible on this weekend, not doing any cooking during this weekend (of course?) and only shopping for snacks and things that we’d want to share over the inevitable drinks and board games. We were craving some real fish and chips … and of course I’d done some research on the drive down! I mean, sometimes I love the adventure of finding something new… but let’s face it, most of the time it’s already been blogged about, Google reviewed, Foursquared or Yelp’d… it’s not especially difficult to make sure you’re going to go somewhere good. And sometimes, I think life’s too short to be eating average food when you’re on holiday, so the internet makes it super convenient to point you in the right direction :). And the direction it pointed us towards was Tigers Fish and Chips in Ulladulla.

And boy were we not disappointed! We got a small seafood basket thing with fish cocktails, prawns and calamari. Deliciously crispy batter on the fish and loads of chips. We really loved the melt-in-the-mouth calamari! I much prefer crumbed fish when we can get it, and we ordered a regular serve of chish and fips but with crumbed fish. Good sized fillet with lovely flaky texture. Often I can come away from fish and chips feeling quite greasy, but everything felt really light and tasty – possibly because it was fried in rice bran oil as explicitly pointed out on the cafe’s signs. Overall we left pretty happy: decent price, decent service, decent portions and you could splash your own sauces at the counter (gotta have some dead ‘orse!). Good start to our getaway!

The weekend really kicked off as more people arrived and the merriment could really begin. The next morning we went out in search of a late brunch and since it was a little cloudy and dreary, we opted not to go to the beach but explore Funland, a large arcade in Ulladulla. A few in our group knew about the place from childhood family trips down the coast and it was a visit of both nostalgic curiosity and just good ol’ fun. There were plenty of games, and a $30 play card bought you a fair amount of game time shared between two people. The games are well priced between right 60c to $2 a game, and the Man and I actually managed to finish a full run of “Deadstorm Pirates,” a closed booth gun game that normally gets too expensive to continue on with. It vibrates a lot and my arms (and butt) were a little weary after haha.

Two hours later and we finally wandered out (pretty happy!) and back to the house for… yes, another round of games. Board games are always a feature in our trips away with friends and from what I’ve been told, they’re in the middle of “making a comeback”. And I’m not talking about your run-of-the-mill Monopoly and Scrabble, which are great in their own way, but there are so many more involved games out there! Games with in depth strategy, luck, intrgue and even roleplay (yes that dirty nerdy word!). I find board games are a fun and mostly relaxing way to pass the time with friends over food and conversation. Maybe its just that my nerdy generation always need an activity, but I find that I love the challenge, and it’s fun to have some friendly competition once in a while! Especially when there’s a cheese plate and some wine involved 🙂 Perhaps I’ll do a post some time about my favourite games, but if you have no idea what I’m on about and you’re interested, I highly recommend Ticket to Ride as an easy toe into a new world of board games!

And so this is where I’ll end this post, with an introduction to the south coast and our little getaway. There’s still much more, including a delicious birthday dinner, more food on the water, and random discoveries on the road! Until next time!